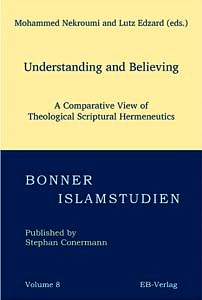 Professor Mohammed Nekroumi published together with Professor Lutz Edzard the edited volume “Understanding and Believing – A Comparative View of Theological Scriptural Hermeneutics”. The volume is now available at the EB Publishing House:

This book deals with the question of the relationship between Sharia and justice. Is the Sharia just or it is oriented towards justice — or is the Sharia the normative order of Islam and something quite apart from the question of justice. Then comes the issue of the Sharia in Western countries — how should a secular state treat some Muslim practices, like wearing the hijab to and from school or work? These questions are just some of those discussed by experts in this volume. In principle, the first normative source of Islam, the Qur’an, orders justice and fair conduct (Rohe). At the same time, an analysis of the concept of justice in the classical age of Islam (Ahmed and Poya) shows that were existed an ambivalent understanding of this concept. The relationship of the idea of justice in Islam to political questions (Ende), to war (Poya), and to modern reform (Mir-Hosseini), again confirms how important the concept is for a critical reflection on traditional assumptions and existing circumstances. The discussion on the hijab in Western countries (Ladwig) shows paradigmatically how justice can regulate the relationship between the secular state and the Sharia. The essays in this volume endeavor to show that the debate on justice, in Islam as well, is an expression of an underlying tension between the perception of an order as a just on the one hand, and the feeling of injustice under the same order on the other. The essays in this volume confirm essentially that justice should be understood as a concept subject to a perpetual reexamination according to changing times and circumstances.

This anthology, published in August 2017, emphasizes once more that the engagement with the Quran is not only of central interest for Islamic scholarschip but is also important to understand the spiritual-religious background of different positions in Islam, be they fundamentalist, liberal, traditional or modern.

The publication discusses textual-hermeneutical accesses from different regions of Islam – From Turkey to Egypt, Syria, Iran and India. The contributions outline the Quran exegesis as mix-and-match-hermeneutics which includes several actors with different epistemological interests, methodological approaches and life experiences. Thereby, the plurality of Islamic thought and action is taken for granted and underlined by the varying accesses to the Quran.

In the course of the work focus of „translating cultures“, Abbas Poya has translated four essays of philosophist of the „open society“, Karl Popper, into Farsi. The four essays have recently been published in Kabul and are collected in the anthology Demukrasi va Masʾuleyyat-e Rouschanfekri (Democracy and Intellectual Responsibility). They are hailed from Poppers last work „All life is Problem solving“. The essays translated have been „On the theory of democracy“, „Remarks on Theory and Practice oft he democratic state“, „Freedom and Intellectual Responsibility“ and „Against the cynism in the interpretation of history“. Poya hopes to stimulate discussions in the Afghan society which has been shattered by a left dictatorship, civil war and religious fanatism and now takes first and shaky steps into the direction of democracy. Furthermore, Poya hopes to make core thoughts on democracy accessible for Farsi speakers living in the European diaspora. All contributions of this anthology deal with aspects of contemporary Muslim thought and have been published by researchers that either have a theological, Islamic studies or political scientist background. The contentual frame of the book has been circumscribed by two presets: First, every contributions should take up aspects of thought of a Muslim scholar active since 1950. Second, the analysis should elaborate on the interdependence of theological debates and their societal context.

The subjects and approaches taken up in this anthology are diverse. Their common ground is the fact that they demonstrate the plurality of Muslim theology.

The publication will be of great interest for students and researchers of Islamic studies but might also be interesting for anyone aiming to get an insight into the younger schools of Muslim thought.

In recent research on „Muslim“ thinkers and theorists, the dichotomously used terms „modernity“ and „Islam“ have been

central. While „modernity“ has mostly been associated with „Western“, „secular“, „reformist“ and, most recently, global“, the term „Islam“ is widely connected to „orientalist“, „religious“, „traditional“, „particular“. Abbas Poya undertakes a change of perspective: Based on four contemporary Iranian authors

– Al-e Ahmad, Shari’ati, Sorush und Malekyan – he examines the processes of transformation in the current Islamic-intellectual discourses shaped by global postcolonial circumstances and points out that these

chains of thought have been formed by the so-called Islamic or orientalist ideas just as much as by the secular/Western ideas.

The relationship between text and spirit and questions on anthropology in Islam have been the subject of two symposiums at the Interdisciplinary Center for Islamic religious education at the University of Erlangen-Nürnberg, which are published in this volume. This anthology wants to help to free Islamic religious education from the narrowness of technocracy and wants to deepen the relationship between Islam and Education from an interdisciplinary perspective.

All the contributions thereby proceed on the baselines of Christian and Islamic theology, philosophy, sociology and education. Their aim ist o trace the relationship between people and God and to bring the theological, educational and anthropological pictures into the light while scooping from the depth of the respective traditions.

In the last decades, controversial discussions have been held on clones and gene optimation. Dignity, about life and the

perfectibility of humans, their spiritual and normative formation as well as about existential feasibility. These topics have also been discussed controversely in Islamic cultures of science. However, Muslims have tend to favor a legal and theological debate over philosophical and ethical discussions.

The study at hand dedicates itself to a philosophical and ethical analysis of the idea of perfect humans in Islam. It shows inhowfar and based on which ethical concepts the idea of the perfect human is rooted in a religious image of humanity.

The author aims at asking based on which picture or self-picture humankind in Islam frames themselves and which ideals they strive for in the course ongoing renewal. Based on the philosophical thoughts of prestigious Islamic scholars, the author tries to show the ethical concepts and ideals that have influenced the self-picture of humankind and in that sense have framed the picture of a „new human“, who locates himself in a process of incarnation and follows the idea of self-optimimation.

Maha El-Kaisy: The Afterlife of the Platonic Soul. Reflections of Platonic Psychology in the Monotheistic Religions (Studies in Platonism, Neoplatonism, and the Platonic Tradition). Plato’s doctrine of the soul, its immaterial nature, its parts or faculties, and its fate after death (and before birth) came to have an enormous influence on the great religious
traditions that sprang up in late antiquity, beginning with Judaism (in the person of Philo of Alexandria), and continuing with Christianity, from St. Paul on through the Alexandrian and Cappadocian Fathers to Byzantium, and finally with Islamic thinkers from Al-kindi on.